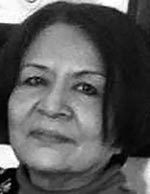 KAYENTA — Alice Mae Luna, 71, was born Aug. 17, 1949, at her home in lower Black Mesa, Arizona, into the Kinłichíi’nii (Red House People Clan), born for Tódích’íi’nii (Bitter Water Clan). Her maternal grandfather was Táchii’nii (Red Running Into the Water People) and her paternal grandfather was ‘Áshįįhí (Salt People). She passed on April 28, 2021.

Alice participated in the Navajo-Hopi Land Dispute hearings, protested the Black Mesa coalmine establishment, and advocated for the Indian Child Welfare Act. She worked with many communities in the Washington, D.C./Maryland area for 40 years before retiring.

Alice was a sister, aunt, grandmother, and friend who valued education, her independence; was an activist, a pioneer, enjoyed healthy eating, being active, and always spoke her mind. She was small in stature but mighty in her presence. She will be missed.

Alice is survived by her sisters, Anita Talaswaima and Florence Leonard.

Services and reception to be determined. 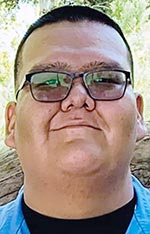 GALLUP — Funeral services for Kaylem Cordell Lee, 22, of Gallup, will be held Friday, May 7, at 10 a.m., at Rollie Mortuary in Gallup, with Pastor Martin Eastridge officiating. Burial will follow at the family plot in Naschitti, New Mexico.

Kaylem graduated from Gallup High School in 2017 and attended the University of New Mexico. He was employed by Jabil Healthcare as a mechanical engineer technician.

Honorary pallbearers will be family and friends who have been loved through Kaylem’s wisdom, grace, loyalty, and heart.

FARMINGTON — Funeral services for Barbara A. Baldwin, 70, of Shiprock, were held April 30 at the Piñon Hills Community Church in Farmington. Interment followed at the Shiprock community cemetery.

Desert View Funeral Home was in charge of arrangements.

SANTA FE — Funeral services for Richard Montoya Sr., 75, of Torreon/Huerfano, New Mexico, was held May 3, at the Fountain of Life Church. He was laid to rest at the Santa Fe National Cemetery.

Richard was born March 20, 1946, and raised in Na’neelzhiin, New Mexico, located on the Eastern Navajo Nation. He was 10 of 12 siblings born to the late June Trujillo and Polito Montoya. He passed away April 27, 2021.

Richard was a beloved husband to Janice Yazzie-Montoya of 30 years. He was a father to six children and grandfather to 10 grandchildren.

Richard accomplished many things in his life starting with being a state championship runner for Cuba High School. He served in the Air Force and was a Vietnam War veteran.

Richard was a school board member for Na’ Neelzhiin Ji Olta’ and Cuba Schools for many years. He was also a chapter official for many years, until this past December of 2020. He worked for the Bureau of Indian Education (Na’ Neelzhiin Ji Olta’), Tribally Controlled Schools (Rough Rock Community Schools), Central Consolidated School District (Kirtland, Newcomb), and Ziems Ford Corners as a security guard.

Richard became a pastor in 2001, along with his wife, Janice. They have been pastors of Fountain of Life Church (Huerfano community) for the past 20 years.

Richard helped build the Fountain of Life Church spiritually, physically, and financially from its infancy. He has made a big impression on many people with counsel and guidance from the Word of God. He loved the Lord and served Him whole-heartedly for 35-plus years.

Richard is survived by his wife, Janice Y. Montoya, and six children and 10 grandchildren.

Richard is preceded in death by his parents, five brothers, and three sisters.

Richard will be dearly remembered as a steadfast and devout Christian, an inspirational father, a strong community leader, and a brilliant hardworking husband, father, and a loving grandfather.

The post Obituaries for May 6, 2021 appeared first on Navajo Times.