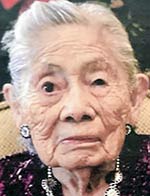 Hilda was an active member of the Christian Reformed Church in Tohlakai, New Mexico, for most of her life. She enjoyed serving the Lord by traveling and singing with the Navajo Evangelical Choir all over the country.

Hilda liked to cook and bake for family and church gatherings. She enjoyed sewing, knitting and jigsaw puzzles. She was also a huge sports fan, especially for local high school basketball teams.

Hilda loved spending time with family and friends, but most of all, she loved reading the bible, sharing God’s word and praying for others. She lived her life for the Lord. Her love, kindness and caring ways were a blessing to many.

Hilda is survived by her sons, Merle Bates and Melvin Francisco; and daughters, Viviene Tallbull, Juanita Francisco-Yanc and Alberta Bates. 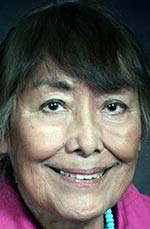 SAWMILL, Ariz. — Graveside service for Lorene B. Ferguson, 77, of Albuquerque, was held March 8 at the family plot in Sawmill, Arizona, with Rev. Leon Sampson officiating.

Lorene was born Dec. 8, 1943, in Fort Defiance, to Mabel (Smith) and Ralph Bennett Sr., into the Hashtl’ishnii (Mud Clan), born for Ta’neeszahnii (Tangle Clan). She passed away peacefully with her daughters at her side on March 1, 2021, at the University of New Mexico Hospital in Albuquerque.

Lorene was raised in her early years by her grandmother, Bah Tsosie, in a traditional hogan in Sawmill. As a child, she helped her grandma in the cornfields and herding sheep. She spent many hours entertaining herself by playing “teacher” to her “students”– the sheep.

Lorene graduated from Window Rock High School in 1961 and went on to attend Fort Lewis College in Durango, Colorado, graduating in 1965 with a major in English literature and a minor in psychology.

Shortly thereafter, Lorene met her future husband, Dr. Bruce Ferguson, while he was working at the Fort Defiance Indian Hospital. Together, they raised two daughters, Dawn and Lucy, and all the while, Lorene helped ingrain a love for family and learning in her children.

In preparation for road trips, Lorene often stayed up late into the night for weeks in advance to record herself reading books into a tape recorder to play for the kids while driving. (The Navajo original version of books on tape.) At the time, Dawn and Lucy often dreaded being forced to listen to the tapes, but as they matured, they know that their love of books and learning was a direct result of her efforts, and the knowledge from those books is still something they draw on in their lives to this day.

Lorene spent many years working in Native community development, welfare rights and as an educator. Not many people know that she was also an entrepreneur. In the 1970s, she owned and ran The Bisontentative, a health food café (before they were trendy) in the University district of Albuquerque, offering coffee, food and live music.

In 1980, Lorene decided to go to law school and was accepted to the University of New Mexico School of Law, graduating in 1983. She went on to have an accomplished legal career, eventually becoming the first woman associate justice on the Navajo Nation Supreme Court, from which she retired in 2007.

Lorene and Bruce traveled all over with the girls, but their favorite family activities were camping in the Jemez Mountains, family river rafting, and trips to the beach. As the girls grew older, she jumped headfirst into the role of beloved “auntie” to her nieces and nephews. In particular, she and Bruce opened up their home and especially their hearts to her younger brother Ben’s children, taking them on many of the same family adventures of earlier years.

Lorene had a special love for her three granddaughters and one grandson, as well as all the family babies, and they in return adored her. All of her grandchildren and her many nieces and nephews, as well as their children, agree that she was an absolutely amazing grandma and auntie. Despite her trailblazing legal and professional accomplishments, she never stopped making up silly songs and games to play with the babies, and was particularly proud of their many accomplishments as they grew up.

In her last years, Lorene enjoyed fresh brewed coffee in the morning light, reading The New York Times, starting with the headline articles, browsing the Arts and Food section, then finishing with the crosswords, cozying with books of all genres and watching the neighborhood birds as they swooped down from the sky to explore for food and rejoice in song.

While Lorene was in the hospital and it became clear she was not likely to recovery, her oldest brother Ralph remembered that when Lorene was a baby, she caught pneumonia and had to be on oxygen. The doctors told her parents she might not survive. After a few days, she pulled through and Ralph believed that God knew Lorene had a purpose on this earth. Seventy-seven years later, after fulfilling a full life of many accomplishments and serving as the matriarch of her Hashtł ‘ishnii family, God called her home.

The family asks that in lieu of flowers, donations be made in Lorene’s name to DNA-People’s Legal Services in Window Rock, the nonprofit legal aid organization providing legal services for low income Navajo citizens. 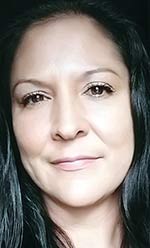 MEDFIELD, Mass. — Funeral services for Bahe Shondee Nez, 40, was held March 9 at Mitchell’s Funeral Home in Medfield, Massachusetts. Bahe will be brought home to Ganado, Arizona, to be buried with her great-grandmother and her cousins.

Bahe was born April 26, 1980, to Richie Nez Sr. and Sharon Patricia Wanders, in Denver, Colorado. She passed away unexpectedly on March 3, 2021. Her stepparents are Marie Nez and Richard Benson.

Bahe had too many friends to list and was loved by everyone. Her favorite thing in the world was making her family and friends smile and laugh.

Angelina was born May 22, 1939, in Navajo Station, Arizona, into the Tsi’naajinii (Black Streak Wood People Clan), born for Naaneesht’ézhi Táchii’nii (Charcoal Streaked Division of the Red Running Into the Water People Clan). She passed away March 4, 2021, in Fort Wingate, New Mexico.

Angelina graduated from Wingate Boarding School in 1959 and attended Haskell Junior College in Lawrence, Kansas. She worked 35 years for the BIA in Chinle and Many Farms, Arizona, retiring in 1995. She also worked for Navajo Nation Peacemaking, Fort Wingate Elementary as a home-living assistant and 10 years with Gallup McKinley County Schools as a health assistant.

Angelina enjoyed sewing, crocheting, cooking, family gatherings, and following her grandchildren with various sports. She loved the game of baseball and enjoyed watching the Dodgers. She had a strong belief in the Catholic faith and traditional ways of life and traditional upbringing with her family, children and grandchildren.

Silver Creek Mortuary is in charge of arrangements.

Duane’s first language was Jicarilla Apache, which he spoke throughout his life. He grew up in a family of 13, eight brothers and four sisters.

Duane was a member of the Church of Jesus Christ of Latter-day Saints and served two years in the Rapid City South Dakota Mission. He served among the Sioux tribes of South Dakota and North Dakota.

Brewer and Lee Larkin Funeral Home in Farmington, was in charge of arrangements.

The post Obituaries for March 11, 2021 appeared first on Navajo Times.

Lonny Lloyd McNavage passed away on Friday, Sept. 24, at his residence in Kearny, Arizona.  Lonny was born to...